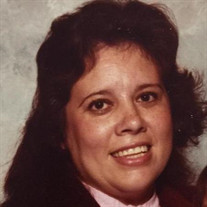 Rita Molina Melendez May 22, 1948 ~ August 30, 2019 Rita Molina Melendez was born on the 22nd of May 1948 and entered God's Heavenly Kingdom (on) August 30th, 2019. She was the second eldest child born to Arturo "Tule" Molina and Esperanza "Hope" (Zaragoza) Molina of San Bernardino, California. She was preceded in passing by her mother Hope, her father Arturo, her sisters Catherine Owens, Sandra Nicholas and Hope Molina. Rita grew up in the city of San Bernardino, California, attending Sturges Junior High School. She at times relocated with her family to various cities as her father was employed as an Aircraft Mechanic for the United States Army. She attended Highland High School, graduating Class of '66 and started attending The American River College in Sacramento, California for two years until relocating back to San Bernardino. She was employed as an associate for Montgomery Wards in the Central City Mall of San Bernardino and later became a Social Worker Assistant for the County of San Bernardino. Rita then met her husband James "Jim" Melendez through employment for the County, as he was an employee with the County as well. Rita and James married on July 3, 1976 at St. Bernardine's Catholic Church in San Bernardino and later proceeded to have four children, three daughters and one son. Rita enjoyed motherhood and became a full-time homemaker shortly after marriage. She became an excellent cook and truly enjoyed sewing for her children and gardening her rose's. She was well known by her multiple nieces & nephews as the baker of the family. She also became the room mother for her four children's classrooms throughout their childhood and partook in multiple school and Girl Scout activities with her children. She took great pride in raising her children and being a supportive and loving wife to her husband Jim of 43 years. Her pride and joy of life was partaking in the nurturing and raising of her fourteen Grandchildren. Rita is survived by her husband James "Jim" Melendez, her three daughters Desiree Angelina Geiger, Lorraine Bernadette Melendez, Monique Leticia Navarro and only son James Erik Melendez, Two Son in laws Nathaniel Geiger and Jessie Navarro. She is also survived by her only living siblings, her sister Dolores "Lola" Journey and her brother Arthur Molina, Her Five Granddaughters, Nine Grandsons, One Step-Grandson, Her Goddaughters Teresa Scott, Regina Owens, Angelica Andrews, Valeria Molina, Reyna Molina and Godson Adrian Nicholas, multiple cousins, a few Great Aunts and Uncles, nieces and nephews. Rita will be Forever loved and Greatly missed by her surviving family.

The family of Rita Molina Melendez created this Life Tributes page to make it easy to share your memories.

Send flowers to the Melendez family.