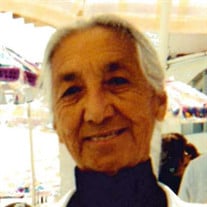 Pauline H. Franco was born on June 22nd 1925 in Smelter Town Texas. She passed away shortly after celebrating her ninetieth birthday in on July 20th, 2015 in San Bernardino, CA. Pauline is preceded in death by her mother Viviana Herrera, father... View Obituary & Service Information

The family of Pauline H. Franco created this Life Tributes page to make it easy to share your memories.

Send flowers to the Franco family.