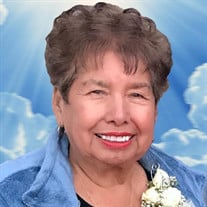 On Tuesday, February 1, 2022, Nellie Ann Razo, loving wife, mother, grandmother, great grandmother, sister and friend went to be with our Lord and Savior, Jesus Christ, at the age of 84. Nellie was born on April 22, 1937 in Redlands, CA where she grew up and helped raise her four siblings. She met Valentine Razo and married him on February 28, 1952. They raised their four children together in San Bernardino and later resided in Rialto, CA where she remained the rest of her life. Nellie was a hardworking, social and well-known waitress for decades. She began at Chico’s on E street in San Bernardino, which later became La Casita café. She was well known throughout the city and loved by so many customers, whom many developed into her ‘regulars’. After the restaurant closed, Nellie continued her waitressing at El Rancho in Highland, CA. She loved serving and talking with the community throughout her work day. Nellie so loved cooking and being with family that often times she didn’t have the chance to change from her peasant top, skirt and apron. From Chile Verde, tacos and menudo to special ordered enchiladas, she made it all. On her off days, Nellie and Val would visit family and spend time together. She would take time to relax by watching her soap operas/telenovelas, shopping, getting pedicures and she never missed a hair appointment. While the years continued, the Razo family grew and Nellie was very active in the lives of all her grandkids, great grandkids included. Nellie never missed birthday parties or award ceremonies and loved to see her grandkids shine on the field, no matter which sport they were playing. Nellie is survived by her loving husband, Valentine Razo and three children, Michael Razo (Nina) of Colton, Valerie Villagran (Rudy) of Rialto and Sandra Aguirre of Rialto. She is preceded in death by her son, Richard Razo. Nellie has twelve grandchildren and a host of great grandchildren. She is also survived by her siblings, Jessie, Josie, Barbara and preceded in death by Richard Ruiz. Services will be held for Nellie Razo on Thursday, March 3rd at Mark B. Shaw In San Bernardino from 6-8pm. Church services at Immaculate Conception at 11:00am Friday, March. 4th followed by burial at Mt. View Cemetery at 1:00 pm.

On Tuesday, February 1, 2022, Nellie Ann Razo, loving wife, mother, grandmother, great grandmother, sister and friend went to be with our Lord and Savior, Jesus Christ, at the age of 84. Nellie was born on April 22, 1937 in Redlands,... View Obituary & Service Information

The family of Nellie Ann Razo created this Life Tributes page to make it easy to share your memories.

Send flowers to the Razo family.