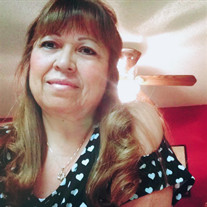 Maria Soledad Berryman, age 58 years, passed away Monday morning, March 28,2016, in Redlands, California after being hospitalized with complications related to lung cancer. Maria was born on August 15,1957 in Cerritos, San Luis Potosi, Mexico. She was the youngest of three children to her mother, Felipa Reyes and father, Anacleto Hernandez. Maria met her husband, Ryan Berryman, in El Centro, California in 1978. A few years later, they joined in marriage on December 12,1981 in Pomona, California and relocated to San Bernardino, California that same year. In 1994, they moved to Highland, California, along with their two children, Heidi and Lamar. Maria leaves behind her beloved husband, Ryan Berryman of a 34 year marriage. She is survived by her two children: Heidi Soares of San Jacinto, California and Lamar Berryman of Perris, California. Maria is also survived by her brother, Jesus Collazo, of Mexico, as well as many nephews, nieces, cousins, extended family members, and numerous in-laws. Maria is also survived by man grandchildren, who are the love of her life. Her grandchildren meant the world to Maria and they, in return, also loved her dearly. Maria is predeceased by her parents and her eldest brother, Fernando Collazo. Maria was employed with San Bernardion Unified School District as a Kitchen Helper worker in elementary schools. She had a true passion and displayed a caring heart for the children who assisted or received meals in the school cafeteria. The children showed respect and kindness to Maria, referring to her as "Ms. Maria". Maria retired in January 2016, after faithfully serving the school district for 18 years. Maria has always shown a sincere love for children, a unique gift in homemaking and a devotion of love and commitment to marriage and family. Maria will be remembered as a loving wife, a beloved mother and a devoted grandmother. She will forever be missed by family and friends. A memorial service and "celebration of life" will be held in behalf of Maria in the chapel of Mark B. Shaw on Saturday, April 9, 2016 at 10am.

The family of Maria Berryman created this Life Tributes page to make it easy to share your memories.

Send flowers to the Berryman family.