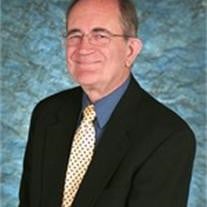 Longtime Riverside City College Professor Glenn E. Hunt, 74, died January 6, 2010, after a valiant battle against cancer. Glenn was born August 19, 1935, in Lubbock, Texas. He will be remembered for his dedicated, caring, and gentle nature towards his family, friends, students, and colleagues, as well as for his devotion to education. After graduating from Texas Tech University in Lubbock, with a B.S. in chemistry in 1955, and a M.S. in 1957, he began his doctorate work at Iowa State University. In 1958, Glenn joined the teaching staff at RCC. Glenn taught chemistry and mathematics for nearly 50 years at RCC, longer than any other in the history of the college. Judi, his wife of 27 years, and two daughters and their families survive him: Sabrina Enyeart, her husband David, and their daughter Megan; Julian (Julie) Grey, her husband Sean Oliver, and their daughters Zoë and Sadie. Glenn’s parents, John L. Hunt and Naomi G. Hunt, preceded him in death. The family thanks the doctors, nurses, and staff of the Loma Linda University Medical Center and the Loma Linda University Cancer Center for their compassion, dedication, and care during Glenn’s illness. A Celebration of Life will be held in the RCC Digital Library Auditorium at 2:00 on January 28, 2010. The Glenn Hunt Center for Teaching Excellence will also be open to visitors. Famly and friends may honor Glenn with a donation to the Glenn Hunt Memorial Endowed Scholarship in Mathematics, c/o RCCD Foundation, 4800 Magnolia Ave., Riverside, CA 92506.

The family of Glenn Hunt created this Life Tributes page to make it easy to share your memories.

Send flowers to the Hunt family.