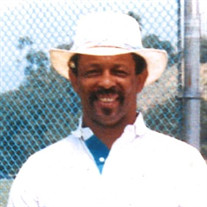 Dexter Scott James- Son, Vietnam War Hero, Friend, Partner, Golfer and all around good man was born December, 17th 1942 in Los Angeles, Ca. He was the 1st and only son of Scott and Helen James. Dexter grew up and graduated in 1960 from San Bernardino High School in San Bernardino, CA. A sports fan at an early age, Dexter excelled at many sports and activities. They included bowling, football and while in school, swimming. He won several awards and medals at the local and state level. Dexter even won an art scholarship to San Bernardino Valley College. Though known for his love of sport- another interest became his focus by the age of 17- The Junior Marines. Dexter wanted to join the United States Marine Corps so badly that he joined the USMC Reserves immediately after he graduated high school. By June 1961, Dexter had managed to become active duty infantry in the United States Marine Corps. He courageously served his country for another 7yrs, earning a USMC infantry award, Purple Heart and the Bronze Star for exceptional valor during combat in Vietnam. After receiving serious injuries in 1968, Dexter was honorably discharged and finally returned home. After the war, Dexter finished his engineering degree and then started working for an architecture firm. Dexter worked in the industry 30yrs. Finally "retiring" and working for his next love- “Golf”. Dexter was employed at San Bernardino Golf Course where he also was a member of the Men's Golf Club. That love of golf also connected him to other veterans. This led to his membership with the American Legion Post 710, where he enjoyed the company of his fellow veterans. While the joke was, no woman would ever measure up to his golf clubs; Dexter managed to open his heart twice. First, in 1976 when he married Diane James, they later divorced in 1982. However, finally, in 1987, Dexter met his partner for life, Bobbie Jean Eursey. Dexter and Bobbie shared 27yrs worth of trials, joys, family, fun and life together. He was with her, co-raising her 6 children who lovingly called him "Pop". Bobbie was the life-long partner Dexter had always looked for and his happiest days were spent with her by his side. Dexter went into his heavenly deployment, July 18th, 2014. He will be welcomed by his comrades that fell in battle, his parents, Helen and Scott, his baby sister, Donna who preceded him in their final journey. Back home, he will be missed by his Partner- Bobbie Jean, his niece, Patricia, his 8 children, 11 grandchildren, 12 great-grandchildren and a host of cousins, friends, fellow Marines, golfers and anyone who had the pleasure of making his acquaintance.

Dexter Scott James- Son, Vietnam War Hero, Friend, Partner, Golfer and all around good man was born December, 17th 1942 in Los Angeles, Ca. He was the 1st and only son of Scott and Helen James. Dexter grew up and graduated in 1960 from San Bernardino... View Obituary & Service Information

The family of Dexter Scott James created this Life Tributes page to make it easy to share your memories.

Send flowers to the James family.