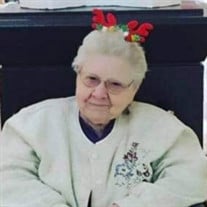 Delores Haynes passed away peacefully on the morning of December 23, 2021 after a gradual decline in health. She was 87 years old. During the last days of her life and upon death, she was continuously surrounded by the love and support of her close family and friends. The youngest of 13 children, Delores was born in Dubuque, Iowa on June 18th, 1934 to the parents Charles and Leone Bradley. After marrying her husband Clarence Haynes (Spud) in 1956, they resided in various places including Illinois, Kentucky and the San Diego area. During this time, she gave birth and began raising their 3 children (Jim, Sue and Mona). Eventually, they settled in San Bernardino, CA. where she remained for 47 years. Her husband Clarence (Spud) passed away in 2002 at the age of almost 72. For the past 3 1/2 years, she was cared for and resided in Oak Hills, CA. with her daughter (Sue Noell), son-in-law (Eddie), and grandson (Joey). Throughout her lifetime, Delores had various occupations such as an aircraft manufacturing worker, a waitress, a housekeeper, a bookkeeper, and an upholstery business owner. However, her greatest passion, love, and devotion was to her family. She raised not only her own three children, but selflessly went on to raise grandchildren, extended family, and helped nurture many other children. She opened her heart and gave so much of her time to family, friends, and anyone in need. Delores was a devoted Christian women and a very active member of the Assembly of God Church for most of her life. She was heavily involved in the church activities and functions. In addition, she was the treasurer for her church for several years until her heath declined. Delores was preceded in death by her husband Clarence Haynes (Spud), her step-daughter Donna Sizemore, her parents, and all of her 12 siblings. Delores is survived by her 3 children (spouses) James Haynes (Flo), Susan Noell (Eddie), and Delmona Hodges (Mike); 3 adopted children Kristina (Dane), Linda, and David (Kristyn) who were raised as and with her grandchildren; 16 grandchildren; 17 great-grandchildren; and 3 great-great-grandchildren.

Delores Haynes passed away peacefully on the morning of December 23, 2021 after a gradual decline in health. She was 87 years old. During the last days of her life and upon death, she was continuously surrounded by the love and support of her... View Obituary & Service Information

The family of Delores Haynes created this Life Tributes page to make it easy to share your memories.

Delores Haynes passed away peacefully on the morning of December...

Send flowers to the Haynes family.